LOS ANGELES — A century ago, Los Angeles built what is still widely considered one of the most sophisticated urban flood control systems in the world, designed to hold back waters from massive Pacific storms like the ones that have recently slammed the state.

After a series of downpours over the past week dumped up to nine inches of rain on the San Gabriel Mountains, some 8.4 billion gallons were impounded behind 14 large dams, easing floods and building up valuable stores of water for the drier summer months ahead.

But in a state that is weathering a crippling, multiyear drought, much larger streams of water — estimated at tens of billions of gallons — have been rushing in recent days straight into the Pacific Ocean, a devastating conundrum for a state whose future depends on holding on to any drop it can.

The era of great dam building passed long ago, owing largely to the multifronted environmental wars California is fighting, and the county has been slow to adopt alternatives. The bulk of the roughly $1 billion collected from Los Angeles County taxpayers over the past four years to store more water has gone largely unspent.

Now, the county is embarking on a radical and risky experiment to see if it can increase supply in a different way: a $300 million-per-year program that would build hundreds of small water capture projects over the next 30 to 50 years that could eventually retain as much water as the mountain dams.

“It is audacious what we are proposing, and it’s gigantic,” said Mark Pestrella, executive director of Los Angeles County Public Works. 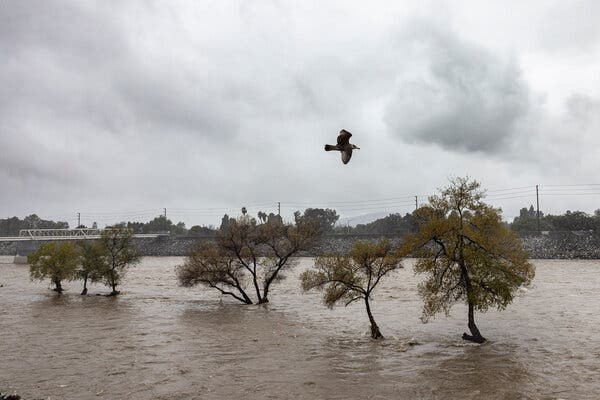 Trees submerged in the Los Angeles River during flooding in Long Beach on Tuesday.

People cycled past puddles after heavy rains in Santa Monica.

The urgency of the situation has become apparent with the series of atmospheric rivers that have killed at least 18 people since late December. On Friday, the state was bracing for another round of storms, with rain in Northern California later in the day and a fresh statewide drenching forecast for Saturday. Forecasters were also predicting heavy snow and fierce wind gusts in the Sierra Nevada.

Some hydrological experts say the new green approach to capturing more of Southern California’s rainfall will be expensive and may deliver less than expected. They said the region could also need some improvements in traditional heavy infrastructure, also under study, for capturing more mountain water.

The program is a reflection of the desperate need for new sources of water in a state that tapped most of its easy supplies long ago, leaving tough choices that will affect future lifestyles, landscapes, the economy and public health.

Rain and Floods in California

For weeks, a string of major storms have hit California, causing extreme flooding and damage across the state.

The drought of the last few years has left reservoirs depleted across the state, burned forests, fallowed farm fields, brown urban lawns, barren ski slopes and disappearing lakes. The crisis on the Colorado River adds to the worries.

After years of deadly drought, images of floodwaters rushing into the ocean as people watch helplessly has been a cruel irony. California long enjoyed abundant water after the 1849 Gold Rush sent easterners streaming into the state. But continued population growth, the emergence of the nation’s largest agriculture industry, increasingly tough environmental regulations and now climate change are leaving less and less slack in the system.

Capturing water in extreme events like those this year is a colossal engineering, environmental and financial challenge, experts say. Even with the planned improvements, water supplies are going to get tighter for major users: the environment, the public and agriculture.

“Everybody is going to lose something,” said Jay Lund, director of the Center for Watershed Sciences at the University of California, Davis, and a member of the National Academy of Engineering. Mr. Lund estimates that up to 25 percent of agricultural land could go out of production.

Grabbing more uncaptured water from rivers may not be easy since almost all of it is dedicated to support habitat for plants and wildlife as required by regulations and court orders, he said. The state’s uncaptured water lies in two principal areas: 65 percent of it is in the wild and scenic rivers of the northern coast, and another 30 percent flows from the Sacramento Delta.

The rest of the water, 40 percent to 70 percent of all the state’s reservoir and groundwater, depending on precipitation in any given year, is used mostly by agriculture and cities.

Proposals for building a water diversion tunnel in the delta, which would help maintain water supplies in Southern California, have generated debate for four decades and their fate remains uncertain. Gov. Gavin Newsom has backed a scaled-down plan.

Until last month, California’s major reservoirs in the Sierra Nevada were far below normal levels, but by Thursday, the gap had significantly closed. Some are now above average, though Shasta Dam, the largest, was still at 72 percent of its average and Oroville Dam, the second largest, was at 90 percent.

Managing storms is labor intensive and requires skilled intervention. Take, for example, the Los Angeles River, which keeps crews in motion around the clock during big rains.

An operations center in Alhambra, staffed by so-called storm bosses, monitors dam levels and constantly adjusts releases to prevent flooding. Dam keepers in the mountains are on alert for any problems, ready to manually turn valves in pounding rain.

People in South Montebello using a park in a median for exercise and walking dogs in Los Angeles this week. The median is part of the East Los Angeles Sustainable Median Stormwater Capture Project.
Stones filling in a shallow ditch help capture water to recharge aquifers.

The Army Corps of Engineers has legal control of the concrete-lined river, so federal and local officials are on the phone with one another continuously. Ground crews in the hundreds spread out to physically measure flows and monitor levees.

Constructing dams to ensure no water is lost during big storm events in Southern California like the present ones would be financially unbearable, Mr. Lund said, comparing it to building freeways with so much capacity that traffic jams would never occur. In the Jan. 9 storm alone, public works engineers estimate, 18 billion gallons of water went into the ocean from the Los Angeles River.

Voters approved $2.7 billion in 2014 for dam expansions that will create 2.8 million acre feet of additional storage capacity, one of the largest efforts to increase reservoirs in decades. Construction is due to start this year, though critics assert the state has slow-footed the program.

Across California, water capture has been a mixed picture: Some rivers run wild into the Pacific, while every drop is captured in others. The same is true of groundwater, but lawmakers in 2014 passed a landmark groundwater management law that is being implemented that will prohibit unlimited drawdowns of aquifers.

The new water capture effort in Los Angeles County was prompted not just by water shortages but by a series of environmental lawsuits that sought to stop pollution of the coast with contaminated runoff — the aim of the new system would be not only capturing runoff but cleaning it.

The effort, known as the Safe Clean Water Program, got a slow start. It was created in 2018 under Measure W, which imposed a big tax on homes and other buildings with impervious surfaces.

Heavy storm runoff flowed down the Los Angeles River toward the ocean in Long Beach this week.

The program piled up money with limited construction in the early years. Mr. Pestrella, the public works chief, said activity has picked up in the last year and now $400 million in projects have been funded, out of about $1 billion in taxes that have been collected.

The program is the largest and most technically advanced effort to undertake small water capture in the world, involving the most difficult terrain, Mr. Pestrella said.

It also has a complicated bureaucratic structure: Multiple committees of engineers, environmentalists and other experts evaluate proposals, give technical scores and set priorities. Outside experts agree about the ambitious scope of the effort but say the goals are optimistic.

Mr. Pestrella acknowledged that there were challenges, saying, “The governance of water is always bumpy.” But he added, “The program looks good to me.”

Bruce Reznik, executive director of the environmental group Los Angeles Waterkeeper and chairman of the capture program’s scoring committee, said the goal of capturing 300,000 acre feet of water per year (the same amount currently captured by dams) has to work or Los Angeles will face more critical water shortages. The county’s 30- to 50-year timeline for completing the program is too slow, he added.

“It is an ambitious goal, but we want to think big,” he said.

One concern among engineers involves maintenance of hundreds of cisterns, dry wells and other features, many of which have filters and permeable bottoms that can get clogged over time.

Water infrastructure has high maintenance costs, and nearly all of Measure W’s tax revenue could be consumed by upkeep at some point in the future, some analysts say.

Another variable is that some of the water that will be captured in cisterns might have been captured elsewhere in the past, said Tony Zampiello, the water master of the main San Gabriel River Basin. He is the executive director of a court-appointed organization enforcing decades-old judgments that allocate water to 192 rights holders.

“It isn’t new water if it would have entered the system somewhere else,” he said. Another question, he said, is how much of the water captured in new wells will actually filter down into the aquifer.

The answer depends on Los Angeles County’s complex geology, which varies greatly through its watersheds. The San Gabriel River empties out of the mountains into a highly permeable gravel and sand riverbed. As a result, 98 percent of the flow is captured in settling grounds — designed areas to accelerate infiltration — and percolated into the groundwater basin for later use.

The Los Angeles River is the opposite. It starts in the San Fernando Valley and over the next 40 miles descends as much as the Mississippi River does over 2,500 miles. It goes over highly impermeable ground and little room exists in its urban path for building spreading grounds. As a result, about 90 percent of its flow ends up in the ocean.

Nowhere are the upcoming small-scale projects more important than in the Los Angeles River watershed, where they can prevent runoff into the river and theoretically recharge groundwater basins, Zampiello notes.

Another approach the county is examining but has not yet approved is a nine-mile, 40-foot diameter tunnel on the river that could divert water from the Glendale Narrows, where there is a significant flooding risk. The $2.5 billion tunnel could capture up to 30,000 acre feet per year, Mr. Hanna said.

Other counties in California are doing better at retaining water. The Orange County Water District, south of Los Angeles, uses domestic sources for 81 percent of its supplies. It recycles 100 percent of its wastewater and captures virtually all of the water along its segment of the Santa Ana River, the largest waterway in Southern California.

Improving sewage treatment, buying land for settling grounds and increasing storage capacity has cost the district $920 million, said John Kennedy, director of engineering at the district. “We have made huge investments to get to this point,” he said.

In Miami, Food Shopping Can Start in the Parking Lot