It was Jan. 9, five years to the day after a torrent of mud, giant boulders and debris had crashed into Montecito, their coastal town near Santa Barbara, Calif. Back then, hundreds of homes were damaged or destroyed, and cars were crumpled like paper. Twenty-three people died.

This time, instead of attending a memorial on the anniversary, residents faced cascading rain that threatened to roil the earth once again. They found themselves fleeing under evacuation orders, with the trauma of the past on their heels.

When they were allowed to return the next day, it was with relief that no funerals needed to be planned.

Montecito can feel like a secret to those who discover it. Tucked into a steep slope, it offers grand views of sherbet-colored sunsets and a glittering sea. The serenity of the foothills provides refuge to a number of celebrities, including Oprah Winfrey, a longtime resident, and the more recent arrivals Prince Harry and his wife, Meghan. 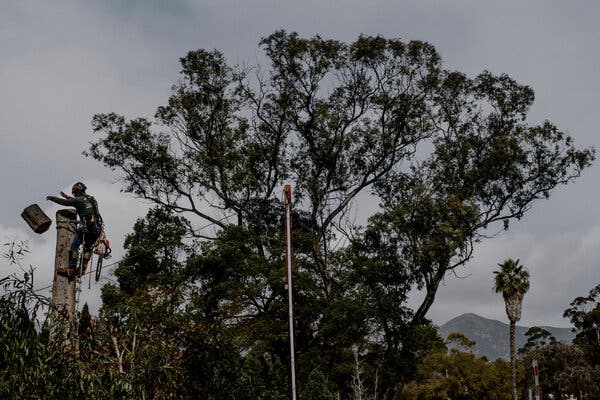 Crews cut down broken trees and cleared debris from roadways after storms and flooding receded last week in the area around Santa Barbara, Calif.Credit…Mark Abramson for The New York Times

Storm debris covered the beach after washing ashore in Carpinteria, Calif., a few miles down the coast from Montecito.Credit…Mark Abramson for The New York Times

The allure of Montecito, as with many places in California, has proven to also be its Achilles’ heel — where natural beauty means living on the edge of possible disaster. In December 2017, when the area was parched with drought, the immense Thomas wildfire marched through, its flames ravaging the vegetation and leaving large burn scars on the land. The following month, storms arrived, and the mountainsides came barreling down.

Residents of Montecito say they are more conscious of safety precautions now — stocking their homes with solar-powered radios, flashlights, a generator, cots to host people — and that they have a new awareness about storm drainage. But they refuse to live solely under the specter of natural disasters. It helps that recent additions to the area’s infrastructure proved successful last week.

“I don’t think anyone here was living in fear it could happen any day again — it wasn’t like that,” said Lizzy Fallows. “It was like a one-off thing, which is why people were spooked.”

Rain and Floods in California

For weeks, a string of major storms have hit California, causing extreme flooding and damage across the state.

An extraordinary three weeks of atmospheric rivers have unleashed flooding, mudslides, power outages and fallen trees across California. The state is expected to get a reprieve on Tuesday, light rainfall on Wednesday and then, finally, a longer dry spell into next week.

Ms. Fallows, 40, grew up in Montecito and, after living for a time in San Francisco, Australia and Tanzania, fulfilled a dream when she returned four years ago with her family.

Two days after the recent evacuations, Ms. Fallows drove around the area in her Tesla, showing her three daughters the Randall Road debris basin, an $18 million project completed last fall that filled up with flood-borne branches, rocks and debris while the water rushed from San Ysidro Creek to the ocean.

“I wanted to show them how the debris basin had done its job,” she said. “Not to scare them, but to show how nature is beautiful and powerful and meant to be respected. And we can coexist if we pay attention.”

Nearby, Aaron Briner, Montecito’s fire marshal, surveyed the creek and the Randall Road basin, which sits on land where several homes were destroyed in 2018.

Kim Cantin says she will never shake the memory of the moment a slurry of earth, water and debris barreled into her family’s cottage and swept her away. Dave, her husband, was found dead on the beach. And the body of her son, Jack, 17, was never fully recovered.

It is the survival of her daughter, Lauren — who was 14 when she was discovered screaming and trapped in mud — that Ms. Cantin has focused on since her world was divided in half.

The two moved to a place 10 minutes outside of town, but Ms. Cantin still owns the empty lot where dirt and a few trees show no hint of the house with the red brick patio that once stood among them.

“A lot of people have been wanting to buy it,” she said of the property. “I’m just not ready to let it go yet.”

Vacant lots among the multimillion-dollar houses illustrate the trauma that is entrenched in the area.

“For the most part, you see a dirt lot, somebody died,” said Abe Powell, director of the Montecito fire district. “Five years after, they still can’t wrap their heads around rebuilding there.”

Mr. Powell, 53, remains troubled by the unheeded pleas he made to residents whose bodies were later found in the debris, as well as whether he could have said something more convincing.

A firefighter assessed damage after the 2018 mudslide in Santa Barbara County, Calif., that killed 23 people.Credit…Marcio Jose Sanchez/Associated Press
The main highway through the area, Highway 101, was left buried in mud by the 2018 mudslide in Montecito, Calif. Credit…Jim Wilson/The New York Times

“I can’t forget those conversations,” he said. “A lot of us can’t.”

The boulders and trees in the Santa Ynez Mountains above Montecito loomed as a threat long before 2018. A 2020 report commissioned by local residents found that there had been 22 debris-related events that struck the community over the previous 200 years, and those events often were capable of sending boulders, logs and other debris well beyond the creek beds where storm runoff normally flows.

The scene for the 2018 disaster was set by the wildfire, which left behind an ashen surface that made the soil in the burn area less able to absorb water. When nearly an inch of rain fell in the space of five minutes, it touched off a destructive debris flow that outmatched the basins.

This year, after 20 inches of rain had already fallen over the past month, saturating the ground, Montecito was inundated with another foot of rain in a 30-hour period. Nearly all of the debris that the soaking brought down was captured by the area’s improved flood control system, according to Kevin Taylor, chief of the Montecito fire district. The improvements included expanded creek beds and basins and six new debris nets placed in canyons.

“I think we proved our concept,” Pat McElroy, a retired Santa Barbara fire chief, said on Thursday after surveying how the steel ring nets his community group had pushed to install had held up through the storm.

The community’s feelings about evacuation have also changed. In 2018, public agencies performed more than 900 rescues of people trapped by flooding, about 100 of them by helicopter; this time around there were just 50 rescues.

Even as climate change widens the extremes between drought and flood, Montecito’s quaint yet rural landscape continues to lure the affluent, who do not balk at a listing for $19 million that offers “gently rolling grounds, ancient oaks.” Newcomers don’t have the same context for their surroundings that the longtime residents do, and houses have sprung up where previous ones were flattened.

Some survivors of the 2018 mudslide chose to change neighborhoods. Berkeley “Augie” Johnson, who has lived in Montecito for 25 years, saw his house demolished in 2018. He and his family ended up rebuilding about 1.5 miles away.

It’s a “less apocalyptic elevation,” Mr. Johnson said. “We rebuilt this house like a tank. It’s not going anywhere.”

The instinct to rebuild in the same place should be questioned, not just in Montecito but in all of California’s vulnerable areas, said Tom Corringham, a research economist with the Scripps Institution of Oceanography at the University of California, San Diego who has studied the costs of natural disasters. The 2018 mudslide led to more than $420 million in insurance claims. “At what point do you stop fighting against Mother Nature and start moving people to safer areas?” he asked.

There are few things stronger, though, than the draw of home.

Carie Baker-Corey, 54, grew up in Montecito and said she enjoyed an idyllic childhood, an experience she wants to pass down for generations.

She had been a wardrobe stylist, but retired after the 2018 mudflow, when she lost her house and suffered a punctured lung, shattered bones and a brain injury. Two of her three daughters died in the mudslide.

Her surviving daughter, Summer, was 12 at the time, and remained in a coma for weeks. When she awoke, she learned that the body of her twin had been found a mile from the house.

Living in an adjacent community since then, Ms. Baker-Corey recently purchased a house back in Montecito, but in a different neighborhood than before. It is, she said, the one place where her grief is understood.

On each anniversary of the disaster, she said, her phone lights up with dozens of calls, texts and emails from those who would never forget such a date: Are you OK? What can I do? We love you.

“I don’t know any other place that would be this compassionate.”

Tags
Said She That Was With

How Long Can Hakeem Jeffries Keep His Democratic Cats Herded?