MILAN — It is nearly 72 years since Giovanni Battista Giorgini, a descendant of an old Florentine family, telephoned a group of American buyers attending the spring haute couture shows in Paris and invited them to attend a fashion show in his home.

Five accepted. They were the Seventh Avenue designer Hannah Troy and the buyers for B. Altman and Bergdorf Goodman of New York, I. Magnin of San Francisco and Morgan’s of Montreal. So successful was Giorgini’s experiment that the shows were soon moved to the Pitti Palace, attendance grew by exponents and the cornerstone of a postwar Italian fashion industry was laid.

It is doubtful Giorgini could have imagined that seven decades later, Italian fashion shows would attract thousands of guests, an equivalent number of press and mobs clamoring for glimpses of fashion show attendees like the members of the K-pop boy band Enhypen.

As much as any trend or runway spectacle (or personnel guessing game; we see you, Gucci), it is the continuity of Giorgini’s vision that struck an observer this week and how durable and robust Italy’s claim on fashion primacy remains.

A case in point was the Fendi show on Saturday. Held at the company’s headquarters, on a set that featured a suspended Rube Goldberg contraption, Silvia Venturini Fendi’s men’s wear presentation could have served as a mission statement for why Italian design still matters. It is not wildly overstating things to say that the designer took on some of the more harassing cultural anxieties — principally about gender and safety — and cloaked them in garments that, while they revealed the male body in an unorthodox manner (one-shouldered sweaters, for instance), simultaneously enveloped it in shapes that were swaddling, protective and unabashedly luxurious. 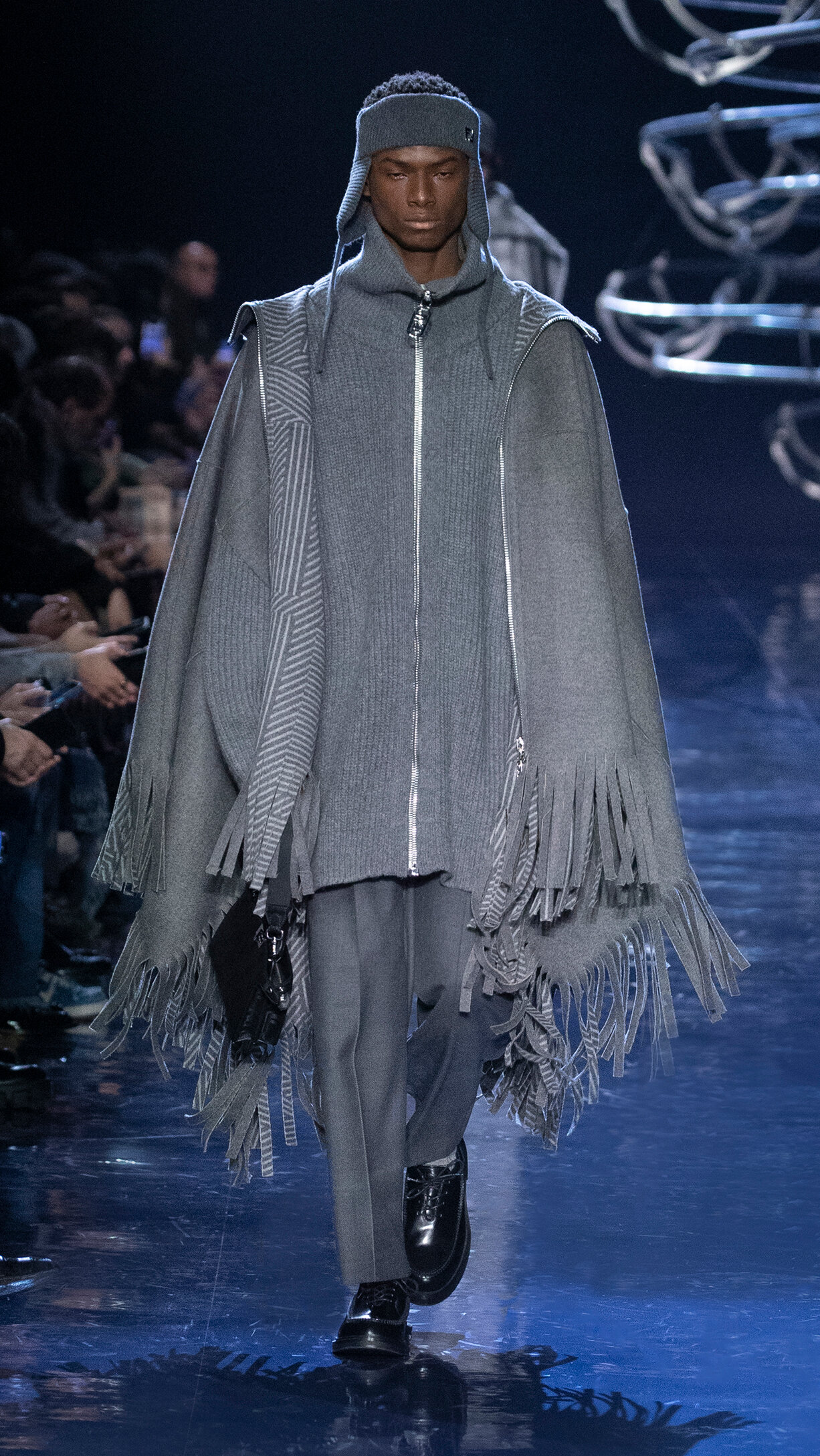 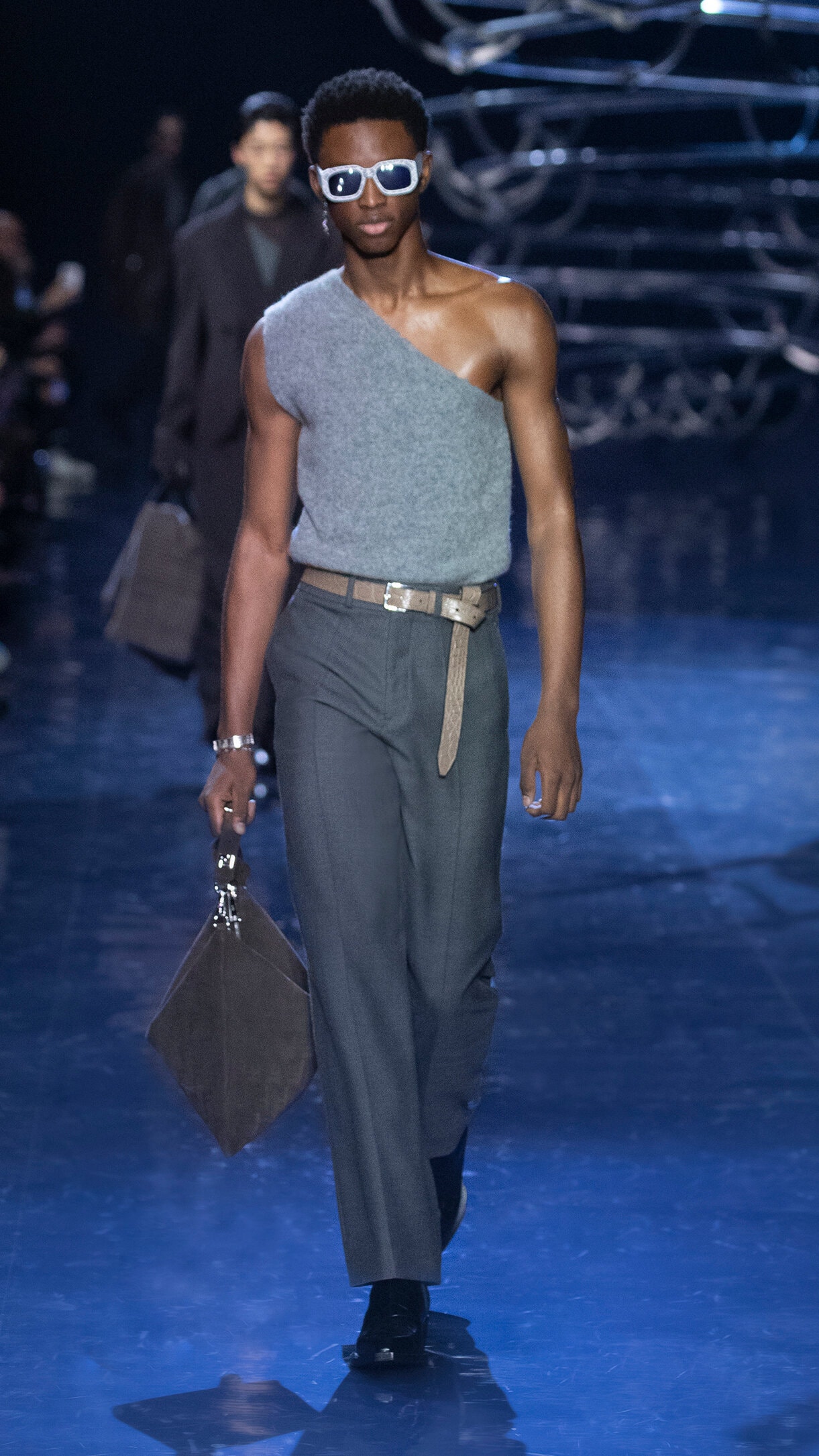 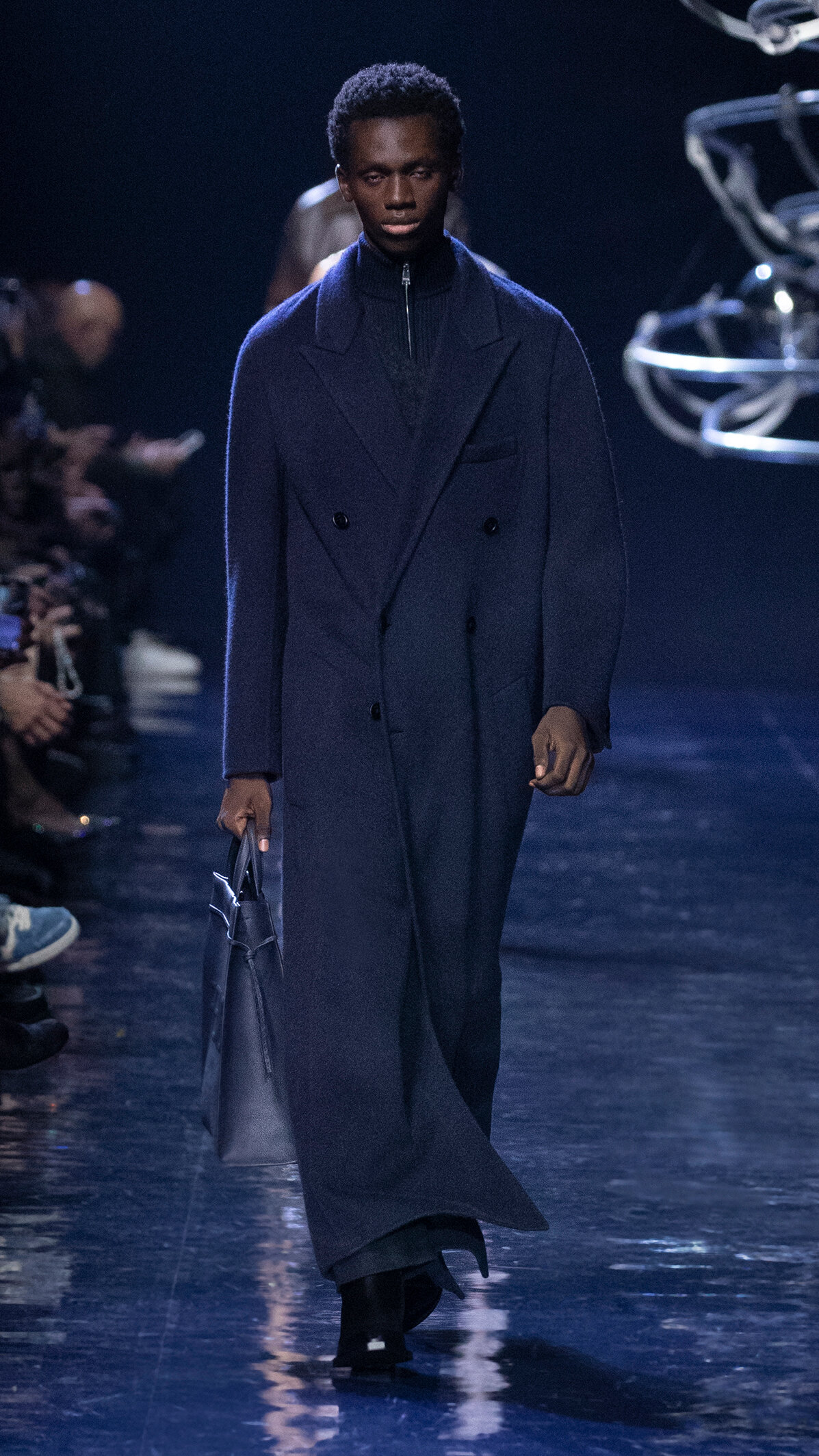 There were sleek gray woolen greatcoats that swept to the ground. There were fringed capes that called to mind a Fendi rendition of the ancient Venetian tabarro cloak. There were, of course, the various bags and intricately treated hide garments associated with a label established in Rome in 1925 as a leather goods shop. More deep rooted, though, were allusions to a discreetly assured manner, a kind of grandpacore typical of the Milanese bourgeoisie and that has attracted the attention of street-style photographers like Scott Schuman of The Sartorialist.

You won’t often see the two labels mentioned in the same sentence, yet if Fendi represents one face of Italianness, Dsquared is in some ways the flip side of the same coin. The twin designers Dean and Dan Caten are natives of Toronto. Yet, having lived and worked in Milan for decades, they are honorarily local and, as such, have adopted an almost stereotypically Italian style of sartorial mash-up — exuberant, silly, rife with references and devoid of specific context.

The Caten twins talk so much about individuality that it is easy to forget how much their designs celebrate the collective teenage id. More determinedly than most, they have spent their careers rummaging around in a psychic closet where goth, emo, gamer geek and fanboy identities are jumbled in a heap.

Can’t decide what to wear? Try everything all at once, as the TikTok star Jashlem did on the Dsquared runway.Credit…Dsquared2

Take the show’s second look, for which the tattooed TikTok superstar JeanCarlo León, a.k.a. Jashlem, was sent strutting down the catwalk in a pink T-shirt emblazoned with a knife-wielding pussycat and the legend “Cute & Nasty,” and some super-distressed jeans worn unbuttoned over a second sewn-in pair of trousers and belted with an outsize rodeo buckle. What followed was a spin-cycle of fringed Western wear, shredded denim, exposed boxers, leather jockstraps, supersize trapper hats and T-shirts that provocatively recast the world-famous soft-drink logo as Choke.

While the show was coed, it was amply supplied with lacy underthings shown primarily on cisgender men. “There’s nothing hotter than a guy in girlie panties,” Dan Caten remarked beforehand. And, given that a raft of maverick labels like Menagerie, Candyman Fashion and Ciciful have joined mainstream brands like Cosabella, Fleur du Mal and Savage X Fenty in cranking out frilly undergarments for those with male genitals, he may have a point.

Placeholder collections can be like emails from Human Resources: You know they contain crucial information and yet nobody reads them. Hence the first Gucci show since the unexpected November departure of Alessandro Michele, the stealth firebrand who reinvented a sagging brand and drove sales into the billions by riding a wave of gender dispersion, was deleted from consciousness almost as quickly as seen.

Like it or not, fashion needs headliners. It is not yet enough to fill the vacuum left by a star designer’s departure by cramming front rows with cross-platform celebrities like Idris Elba, Nick and Susie Cave, Kai, Jalen Ramsey and the elite gamer Pow3r, hiring live bands like Marc Ribot’s Ceramic Dog to perform and then presenting a studio team’s crowdsourced efforts. 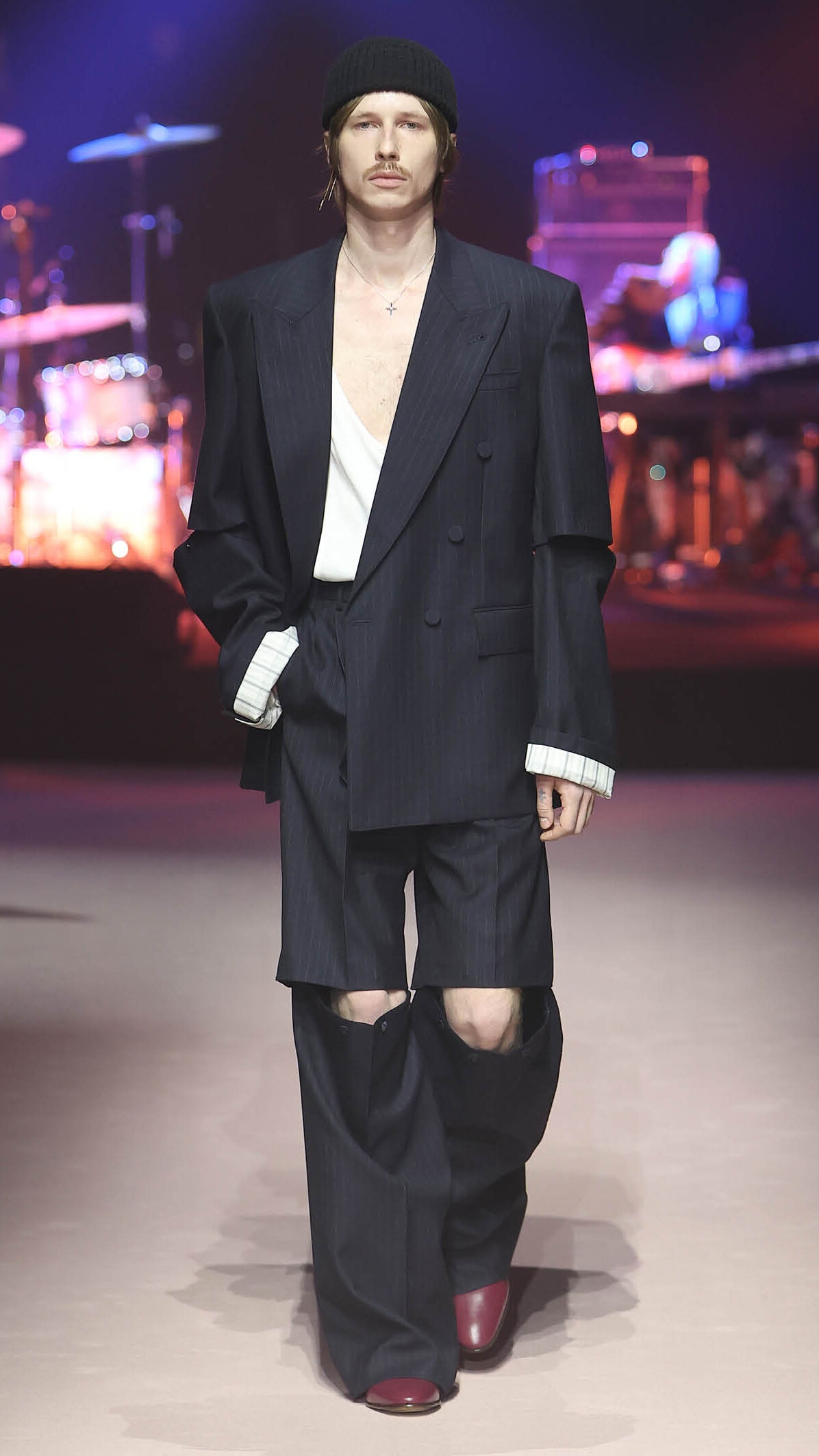 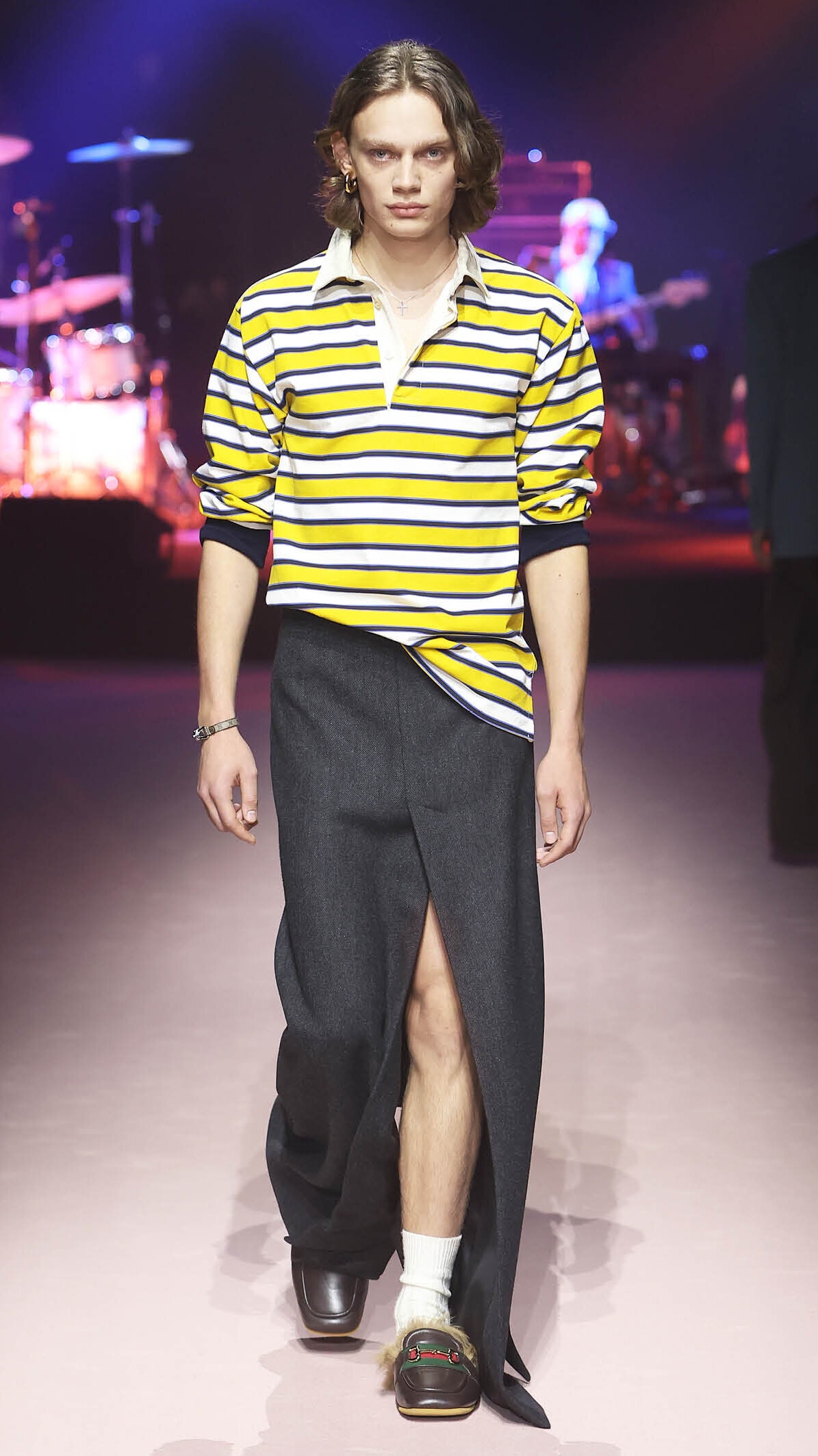 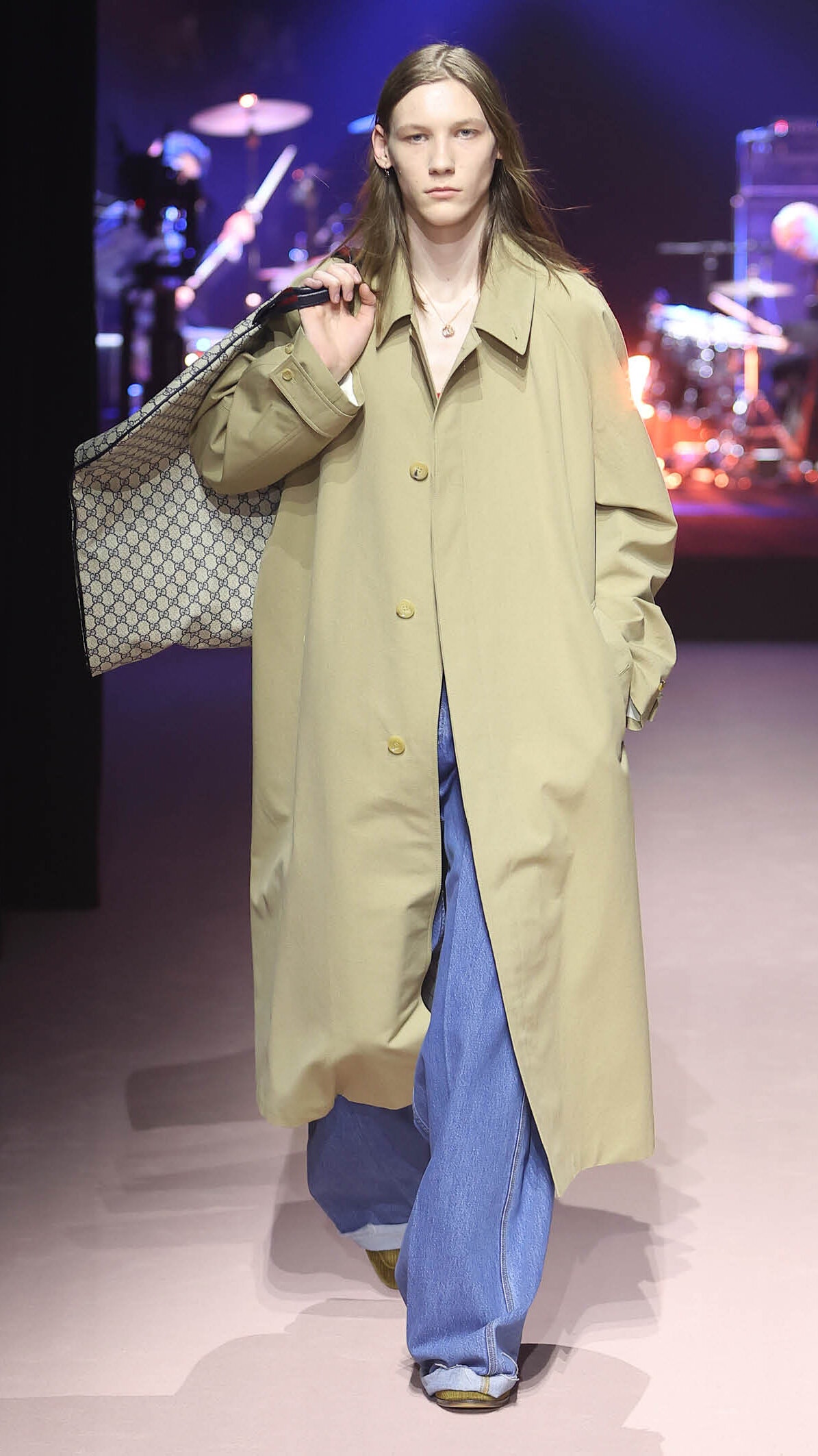 To be sure, there were elements of the Gucci collection to approve, if not exactly admire or covet. (Admittedly, a supersize flasher raincoat was pretty cool.) And, yes, in the show’s first looks it seemed as though the brand had decided to emphasize foolproof elements of a tailoring heritage by rendering trousers and jackets and coats voluminously and pairing them with skinny shirts reminiscent of 1970s Florence.

Ultimately, and as a “reflection of the individualities represented by the multifaceted creatives and craftsman who inhabit the house of Gucci,” according to the notes, the show was a semi-coherent blur of ankle boots, scarf-patched denims, sailor beanies and other products likely to reduce the interval between full-price retail and markdown at Woodbury Common.

And certain things were downright puzzling. To wit, some goofy pirate boots that forced the models to walk with an oddly mincing gait and a floor-length skirt of industrial gray wool that came with a deep slit up the front and no zipper. It is one thing to toy with gender tropes and quite another to ignore anatomy. “It’s not nice to fool Mother Nature,” to quote a famous ’70s advertisement for Chiffon margarine.

“All my life I’ve wondered why fashion is considered so cheap and so banal in various contexts,” Miuccia Prada remarked in notes for a show that, as so often in the career of this designer, aimed at upgrading the status of fashion in the cultural hierarchy from that of perennial stepchild. 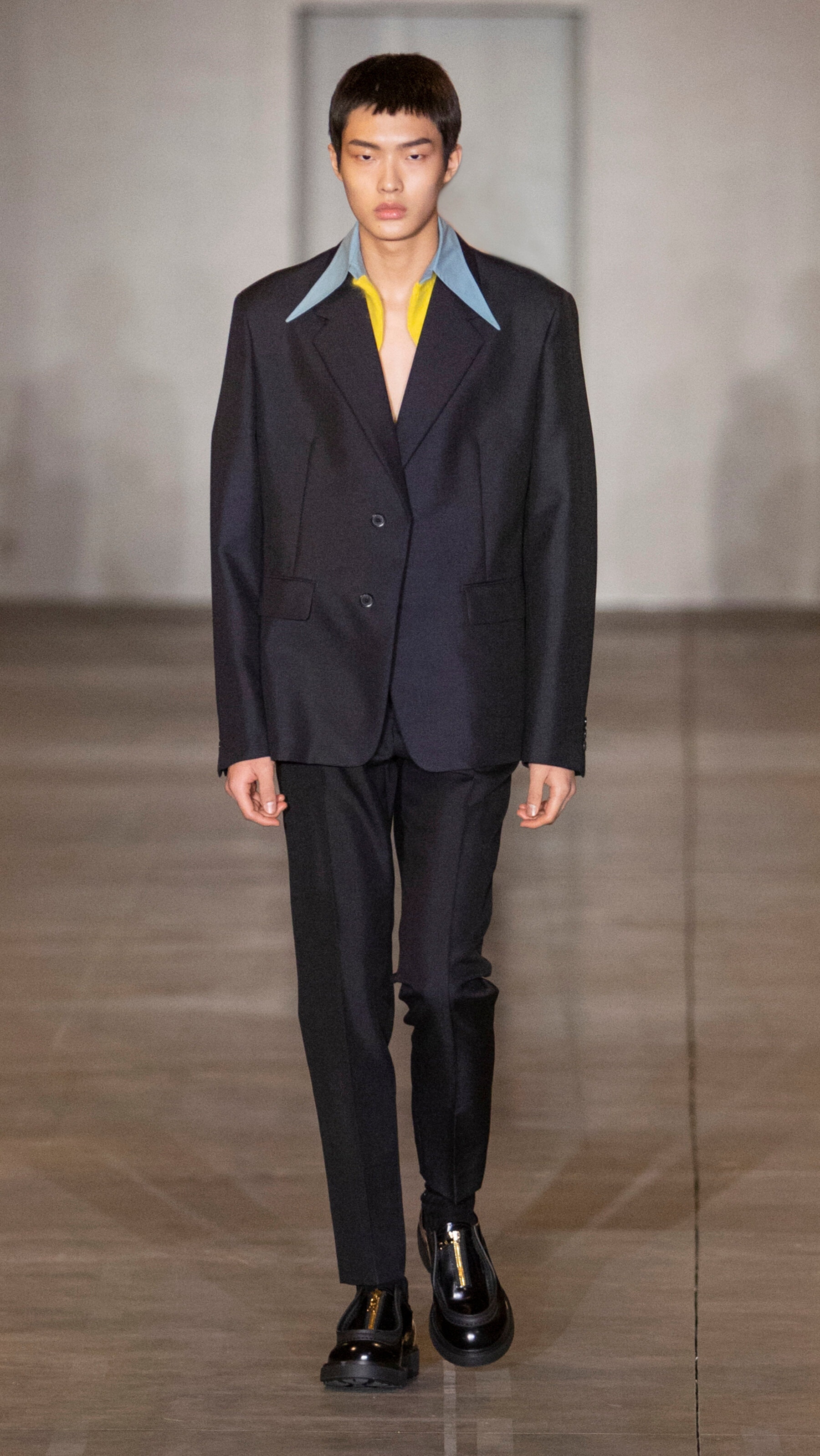 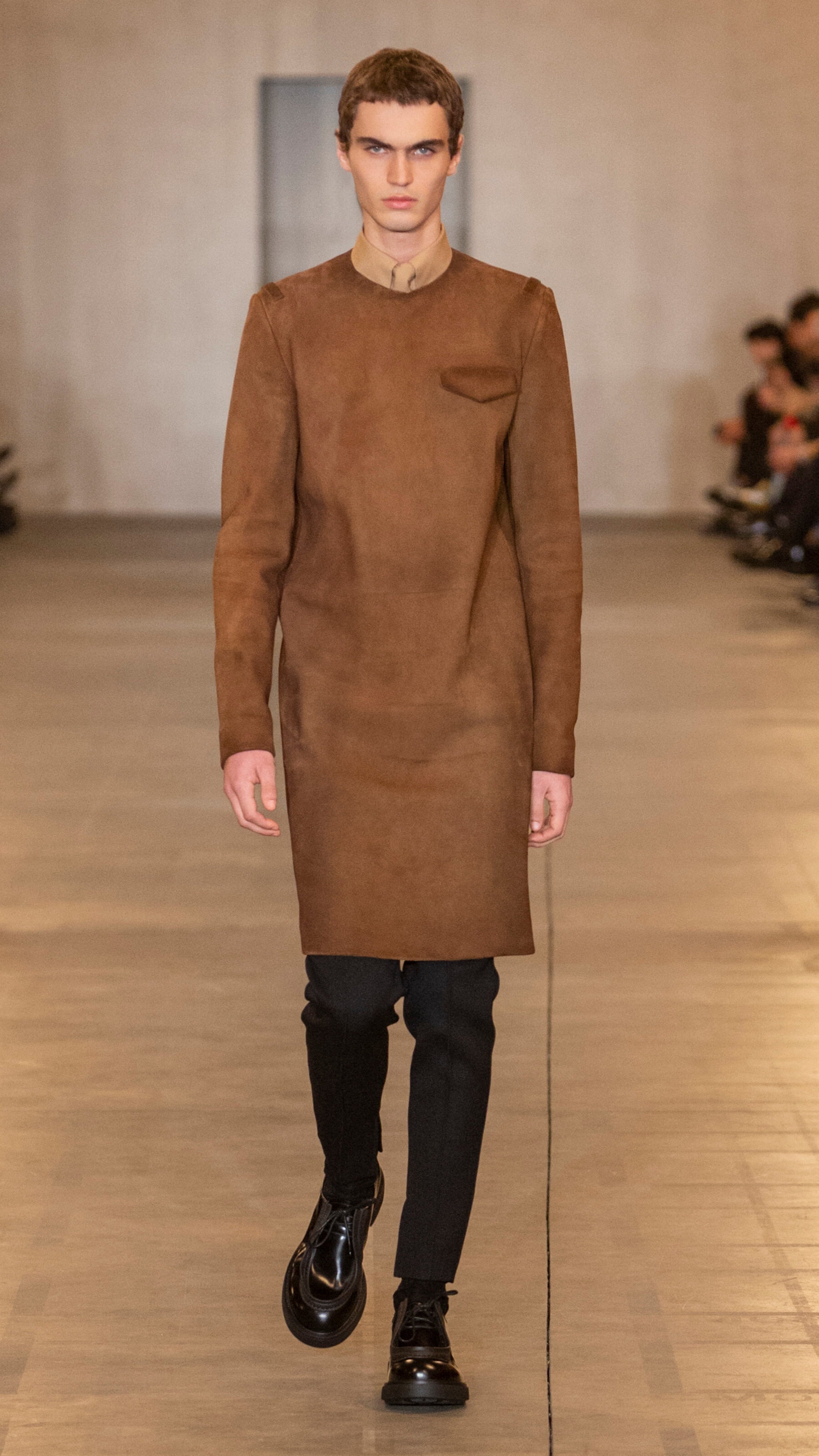 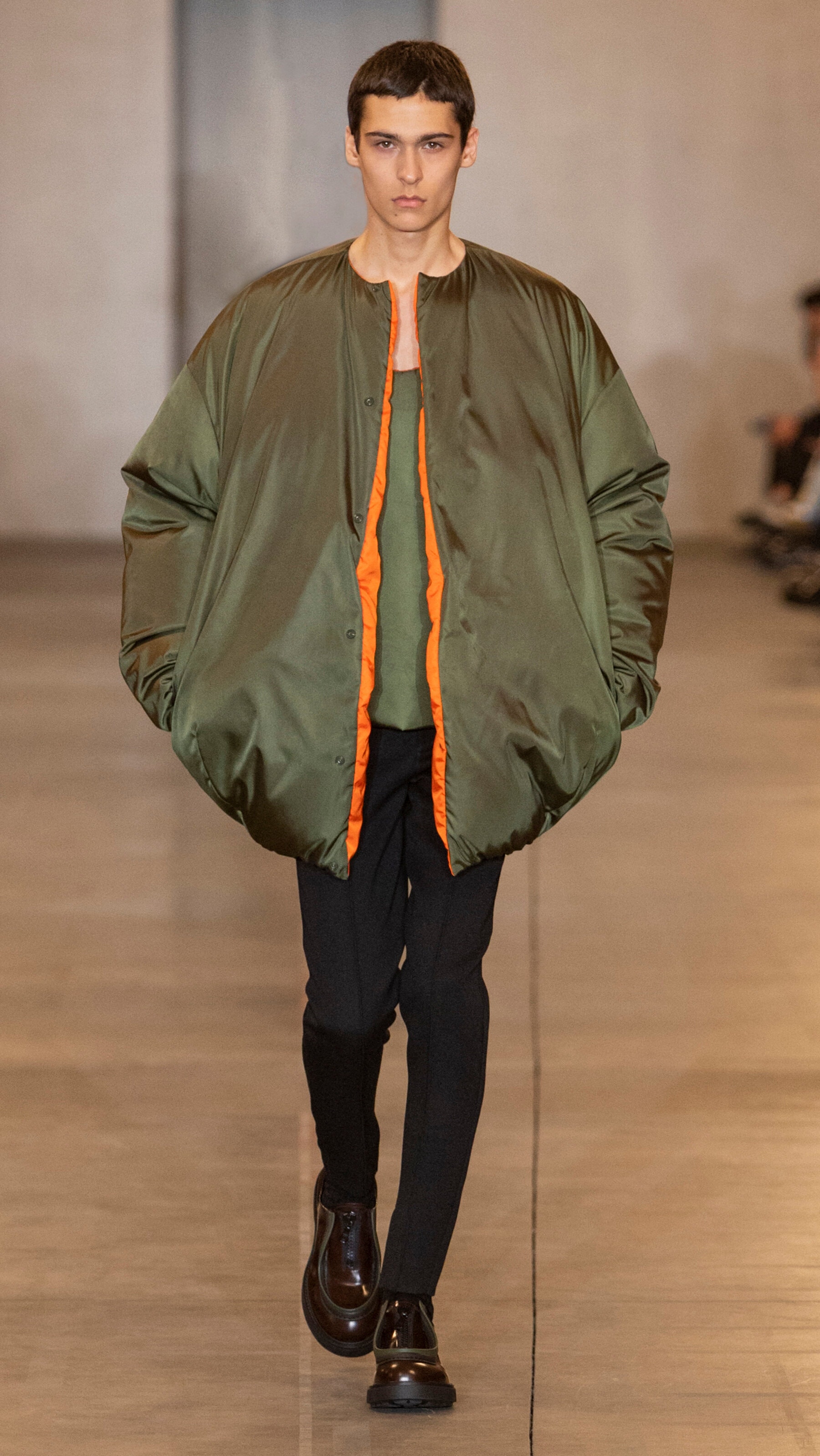 The title of the show was “Let’s Talk About Clothes,” and the two designers — Mrs. Prada and Raf Simons — used a strict visual grammar to assemble groupings based on traditional masculine garments reduced to stark geometric shapes. Perhaps the designs were uncomfortably reminiscent of work Italo Zucchelli did at Calvin Klein before being replaced at the label by Mr. Simons. Also, where Mr. Zucchelli celebrated sexuality, the Prada models were so underdeveloped they looked as if puberty had yet to kick in.

Yet if both the casting and a collection of largely monochrome circular, tubular, conical and squarely boxy stuff (jackets, suits and coats, some single-breasted, some two-buttoned, some three-buttoned; and also parkas, MA-1 bombers and mid-calf duffle coats snug enough to be hobbling) made scant allowance for physical ease, that was doubtless part of the point. Even the suede work aprons refashioned as tunics called to mind manual laborers in an August Sander portrait. Sander’s subjects (like, evidently, Mrs. Prada and also, perhaps, Mr. Simons) understood innately that, in the long sweep of history, personal comfort is a fairly novel idea.

History is seldom far from the thoughts of Giorgio Armani, who as he approaches 90, increasingly casts his thoughts backward to the Italy of his youth. “We tend to forget about so many beautiful things that have been done,” Mr. Armani said Monday before the V.I.P. presentation whose guests included Ed Westwick, James Norton and the “White Lotus” hunk Theo James.

Seated on a stage created inside the palazzo where he lives in center city, Mr. Armani tented his hands and gestured toward a set suggestive of the marmoreal elegance characteristic of entrance halls constructed throughout the city from the 1920s to the 1970s.

Increasingly, in recent years, Armani shows revisit a style of dress that is rich, quiet and evocative of a metropolis as staid as it is elegant. Not for the Milanese or Mr. Armani the exuberance of southern Italy. Here, women of a certain age and class still hold to a singsong Italian adage that translates as “a low heel, a dab of makeup and a string of pearls.”

It is not an Instagram-friendly way of dressing, and so the shows can sometimes feel like looking at old Kodachrome slides — all those eight-button jackets, nubby tweeds, woolen shawls and belted overcoats. (It hardly helps that his models move at the speed of molasses.) Despite that, there is a distinct pleasure to be experienced by relaxing into the pace of a designer who, above all, stands for continuity — the “OG of OGs,” as one wag remarked.

It is a bit like having a tisane at a traditional confectionery shop like Marchesi, founded in 1824, with a relative whose sense of style, correctness and propriety are firmly rooted in the past. Keep your trashy TikTok and your visually noisome Instagram feed, Mr. Armani often seems to be saying. Take a walk around this ancient city and value what came before.

“With beauty you can touch something eternal,” he said.

‘Polar Vortex’ Got You Baffled? Try This Extreme-Weather Guide