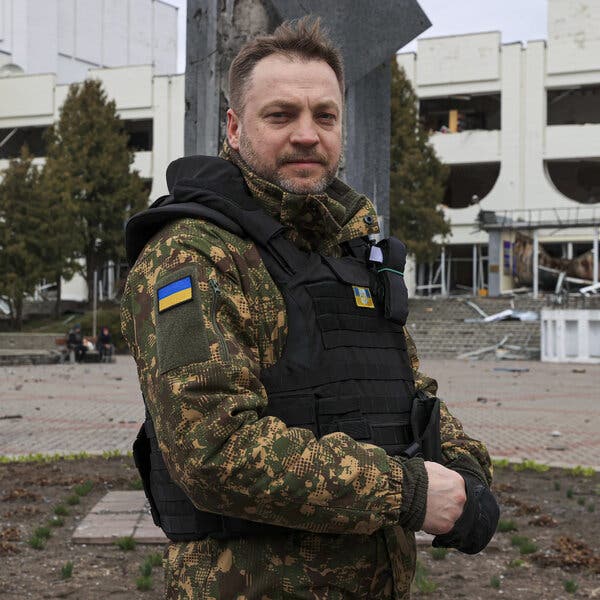 Ukraine’s minister of internal affairs, Denys Monastyrsky, was among at least 14 people who died yesterday in a helicopter crash. He is the highest-ranking Ukrainian official to die since the beginning of Russia’s invasion last year. An investigation is underway, but there were no initial signs that the aircraft had been shot down.

Monastyrsky’s death deals a blow to a ministry that has played a critical role in the war effort: He oversaw police and emergency services and handled rescue efforts after missile strikes. His top deputy was also killed in the crash, as well as other pivotal figures in Ukraine’s wartime leadership.

The accident comes as the U.S. begins to soften its stance against giving Ukraine the weapons it needs to target Crimea, despite the risk of escalation. Kyiv is looking to strike Russia’s land bridge, a critical supply route that connects Crimea to Russia through the occupied cities of Melitopol and Mariupol.

Davos: In a video address to the World Economic Forum in Switzerland, Volodymyr Zelensky, the Ukrainian president, called for a minute of silence to remember the victims of the crash and then made a passionate speech. “The tyranny is outpacing democracy,” Zelensky said. “The time the free world uses to think is used by the terrorist state to kill.”

European response: Olaf Scholz, the German chancellor, offered a robust expression of solidarity with Ukraine, reflecting not only the imperative of repelling a brutal aggressor but also palpable relief that Europe has not been crippled by the war. He did not mention whether Germany will send battlefield tanks to Ukraine.

Israel’s Supreme Court yesterday blocked the ministerial appointment of a politician who was convicted of tax fraud as a fight over the judiciary intensifies. Ten out of 11 judges on the panel ruled against Aryeh Deri, the leader of an ultra-Orthodox Sephardic party and a close ally of Netanyahu, on grounds of “extreme unreasonability,” and said the prime minister should remove him from his posts.

The decision came as Netanyahu, who is on trial on corruption charges, and the judiciary are locked in a battle over the Supreme Court, with top political leaders seeking to assert more control over legal matters. Those efforts have prompted street protests in cities across Israel, as many Israelis fear that the judicial changes could undermine the country’s democratic institutions.

In addition to changing the way judges are chosen, the government’s proposals also include reducing the Supreme Court’s ability to revoke laws passed in Parliament and allowing it to override such court decisions with a bare majority of 61. The government also wants to turn the legal advisers in government ministries into political appointees who would no longer answer to the attorney general.

What’s next: Netanyahu must now decide whether he will respect the court ruling or defy it and head a government that opposition leaders say would be “illegal.” An initial statement of support for Deri by Netanyahu’s staff appeared ambiguous, but it suggested that the coalition wanted to find a way to keep the minister in office, or at least keep his party in the coalition.

Jacinda Ardern, the New Zealand prime minister, said earlier today that she would not seek re-election and would step down on Feb. 7. Labour Party lawmakers will elect a new leader of the party — and the country — in three days’ time.

In a tearful announcement, Ardern said she did not feel emotionally equipped to complete another term. “I believe that leading a country is the most privileged job anyone could ever have, but also one of the more challenging,” she said. “You cannot and should not do it unless you have a full tank plus a bit in reserve for those unexpected challenges.”

Ardern became prime minister in 2017 and won re-election in 2020, largely on the strength of New Zealand’s approach to Covid. Her compassionate response to a massacre at two mosques in Christchurch in 2019 solidified her image as a global liberal icon. But her party has since fallen sharply in the polls amid economic troubles and some highly publicized instances of violent crime.

Analysis: Ben Thomas, a political commentator and former press secretary for the National Party, said her resignation could spell disaster for the Labour Party. “She’s Labour’s No. 1 political asset,” he said. “It would very much be a personal decision to step down, as opposed to a considered strategy about what would be best for Labour in the election.”

What Else Is Happening

If women were represented in India’s formal work force at the same rate as men, the country’s economy could expand by an additional 60 percent by 2025, according to some estimates.

Single working women are now making their case for greater freedom from India’s conservative norms. Their often infuriating quest for housing is a barometer for the country’s promises of modernization and rapid economic growth.

Sister André, a French nun and the world’s oldest known person, who lived through two world wars, the 1918 influenza and the coronavirus pandemics, died on Tuesday in France. She was 118.

Why the Kylian Mbappé-Real Madrid saga is far from over: The Spanish champions were heartbroken last summer but are still working — cautiously — on a plan to sign Mbappé.

How Chelsea won the race for Mykhailo Mudryk: TheToddBoehly-Clearlake Capital consortium secured one of Europe’s brightest young talents from under Arsenal’s noses for a salary of only $120,000 a week.

U.S. women’s national team begins a World Cup year: U.S. players offered thoughtful insights on a variety of topics before a win against New Zealand to open an important year.

From The Times: Rafael Nadal, the top seed, is out of the Australian Open. He lost yesterday after he injured his hip.

The future of climate change activism

Bill McKibben, now 62, was among the first climate change activists, publishing his groundbreaking book “The End of Nature” in 1989. Xiye Bastida, 20, whose early life in Mexico was disrupted by floods and drought, is a climate activist in Pittsburgh.

This is a lightly edited and condensed excerpt from a conversation the pair had in December about their histories as activists, the future of the movement and what is the role of climate change activists. Read the full transcript here.

What does “hope” mean to you?

I was invited to a Vogue panel. The person who invited me, after the panel, said that they were actually going to change a lot of the way that Vogue operated. It’s very different to say, “I’m going use my power and my influence in the space that I occupy to change things because of something you said,” versus, “You give me so much hope.”

McKibben: One of the things that makes me feel hopeful is that I no longer feel lonely in this work — which I did, through some decades. But I don’t think we owe anyone hope.

The job of activists is not to make people feel psychologically improved and more hopeful. There’s days when I don’t feel particularly hopeful. But Xiye is absolutely right: If there is hope, it lies in people deciding to join together to do this work.

This one-pan chicken meal yields a bronzed bird on a tangle of greens.

“Beautiful Beings” is a brutal Icelandic drama about boyhood and bullying.

Franz Kafka’s diaries, which he ordered a friend to burn, offer revelation upon revelation.

That’s it for today’s briefing. See you tomorrow. — Natasha

P.S. Tracy Bennett, the editor of Wordle, discussed “passionate” fans and how she picks words on The Today Show.

The latest episode of “The Daily” looks at facial recognition software.

Send thoughts, feedback and anything else to [email protected].

Tags
Hope New Said That Was