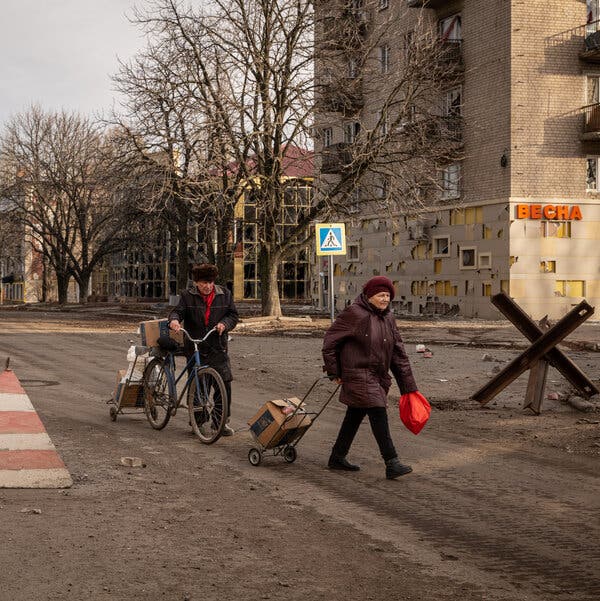 In a deadly attack on New Year’s Day, Ukrainians used American-made long-range HIMARS rockets to kill dozens — and perhaps hundreds — of Moscow’s troops in the occupied city of Makiivka, in eastern Ukraine. The strike prompted outraged Russian war hawks to accuse their military of lethal incompetence.

The attack killed 63 troops in a building housing them, according to the Russian Defense Ministry. A former Russian paramilitary commander in Ukraine, Igor Girkin, wrote that “many hundreds” were dead and wounded. Ukrainian military officials said it appeared that “about 400” Russian troops had been killed, though they did not explicitly take responsibility for the attack.

None of the claims could be independently verified, but even the lowest number would represent one of the worst Russian losses in a single episode in the war, and an embarrassment for Vladimir Putin, the Russian leader. Pro-war Russian bloggers and some government officials said the debacle was caused by the military’s own mistakes.

Big picture: More than 10 months after an invasion that many expected would produce a quick Russian victory, each side has suffered more than 100,000 killed and wounded, by Western estimates, and the war has become one of attrition, with no evidence of an end in sight.

In other news from the war:

Nearly three years of “zero Covid” measures have crushed businesses in Chinese cities like Guangzhou, whose streets are lined with shuttered stores. China’s reversal of its Covid restrictions in early December was meant to help places like Guangzhou. But a chaotic approach to reopening has led to a tsunami of infections that has swept across the nation.

Faced with an unpredictable — and uncontrolled — epidemic and financial uncertainty, people and companies are spending cautiously, suggesting that the road to recovery will be uneven and painful. China is also confronting broader challenges beyond its borders, as the global economy slows, dragged down by high inflation, an energy crisis and geopolitical turmoil.

China’s factory activity contracted in December as rapidly spreading infections grounded workers, snarled deliveries and dampened demand, according to a government survey of manufacturers. For service industries like restaurants, business was almost as bad as in early 2020, during the nearly nationwide lockdown that followed the first Covid outbreak in the city of Wuhan.

Quotable: “The epidemic has had a great impact on the production and demand of enterprises, the attendance of personnel, and logistics and distribution,” the National Bureau of Statistics said in a statement.

Tens of thousands of people — a mix of Roman Catholic faithful and tourists — lined up outside St. Peter’s Basilica in Vatican City yesterday to pay last respects to Benedict XVI, the pope emeritus, who died on Saturday at age 95 and who is now lying in state. The Vatican said that at least 65,000 people passed through on the first day of the public viewing.

Benedict led the world’s 1.3 billion Roman Catholics from 2005 to 2013. He stunned the world a decade ago when he announced that he would retire, the first pope to do so in some 600 years, citing his declining state of health. He lived for another 10 years, residing in a secluded monastery in the Vatican and remaining “hidden from the world,” as he had pledged to do.

Inside St. Peter’s, Benedict rested on a simple dais in front of the main altar, dressed in traditional red and white garments, his hands crossed beneath a rosary. There were no other papal insignia or regalia, such as the silver staff with a crucifix. Two Swiss Guards, who protect the pope and his residence, stood at attention as mourners passed by.

Church politics: Bereft Catholic conservatives have mourned the loss of a leader who championed the traditions, doctrines and church law and order that they cherished. Pope Francis, his successor, has a less orthodox vision, welcoming divorced or L.G.B.T.Q. Catholics and restricting the Latin Mass adored by traditionalists.

What Else Is Happening

Millions of people fly for the holidays in late December. Frustration is often a part of that travel, but if an airline gets things right, the food it serves can help take the edge off. If not, a bad meal just compounds the misery. What does it take for that tray to make its way to you?

What we’re hearing about Chelsea midfield targets: Midfield is an area of concern after the draw with Nottingham Forest on Sunday — so what do we know about the team’s transfer targets?

U.S. soccer’s best performances of 2022: Some of the best displays across American men’s and women’s soccer came on the year’s biggest stages.

What is the secret to being happy? It might be prioritizing your relationships with your family, friends and spouse, as one long-running study suggests, or having the fortune to live in a country with a strong social safety net. Pharrell Williams, the singer of the song “Happy,” believes that gratitude is the answer to finding happiness in everything.

Pin it on good health, perhaps, or on not being a 15-year-old girl; on seeking joy in the mundane or on “nunchi,” a Korean word referring to the art of sensing how others feel and responding appropriately. (You probably won’t find happiness in homeownership.)

One possible route: The Times’s new 7-day happiness challenge, which offers a week of advice on a crucial element of living a good life — your social ties. To get started, take this quiz to assess the strength of your current relationships, and here are some tips for building more joyful social bonds.

The photographer Simbarashe Cha captured the sartorial choices of residents of Dakar, the Senegalese capital.

That’s it for today’s briefing. Thanks for joining me. — Natasha

“The Daily” will return tomorrow.

You can reach Natasha and the team at [email protected].

Tags
Cha That Time Who With

In Romania, U.S. Troops Train Close to Russia’s War, in Signal to Moscow

No, K-Pop Isn’t a Government Plot. Now Leave Me Alone!

Will the Metaverse Be Entertaining? Ask South Korea.
51 mins ago

Bus Plunge in Pakistan Kills at Least 40
2 hours ago