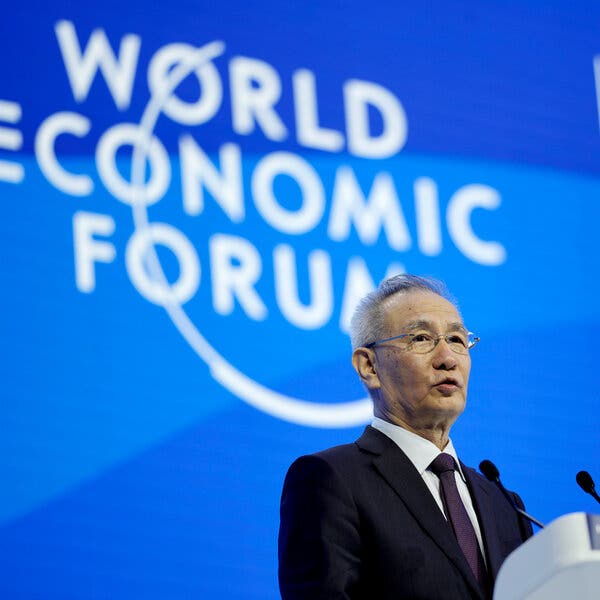 Amid crises, China returns to Davos

A Chinese delegation at the World Economic Forum in Davos, Switzerland, is seeking to assure foreign investors that after three years of pandemic isolation, life is back to normal. Yet the data suggests otherwise: China’s population shrank in 2022 for the first time in 61 years, and economic growth last year slowed to 3 percent, well below the trend of the past decade.

Speaking at the gathering, a senior Chinese official, Liu He, expressed confidence in the Chinese economy. The Covid crisis was “steadying,” he said, and China had passed the peak of infections. He did not mention the 60,000 fatalities linked to the coronavirus since the lockdowns were lifted.

Five years earlier, Xi Jinping, China’s top leader, came to Davos to claim the mantle of global economic leadership in a world upended by the election of Donald Trump in the U.S. and Britain’s vote to leave the E.U. Since then, the U.S. and Europe have united to support Ukraine against Russia, leaving China among Russia’s few allies.

Context: China is not the only country facing a demographic crisis. Many developed countries are aging, and toward the middle of this century, deaths will begin to exceed births worldwide. The shift is already starting to transform societies.

Janet Yellen warned that the U.S. would reach its existing borrowing cap of $31.4 trillion on Thursday.Credit…Adam Perez for The New York Times

The threat of default on U.S. debt

With days to go before the U.S. bumps up against a technical limit on how much debt it can issue, and a few months before all of its options are set to be exhausted, Wall Street and Washington are beginning to grapple with the real possibility of a default on U.S. debt.

Analysts are warning that the fight could tip from partisan brinkmanship to outright catastrophe. A default would most likely rattle markets and carry big risks, no matter how the Federal Reserve and the Treasury try to curb the fallout.

Bank of America analysts wrote this week that a default in late summer or early fall was “likely,” and Goldman Sachs called the possibility that the government would not be able to make good on its bills a “greater risk” than at any time since 2011.

Wrangling: Republicans, who control the House by a slim majority, have made clear that they want deep spending cuts in exchange for raising the debt limit, which is required to pay for obligations the country has already committed to.

The Ukraine conflict has become an artillery-driven war of attrition.Credit…Ivor Prickett for The New York Times

The Pentagon is tapping into a stockpile of American ammunition in Israel to help meet Ukraine’s need for artillery shells in the war with Russia, officials said. The stockpile provides arms and ammunition for the Pentagon to use in Middle East conflicts. The U.S. has also allowed Israel to access the supplies in emergencies.

The Ukraine conflict has become an artillery-driven war of attrition, with each side lobbing thousands of shells every day. The war’s outcome may hinge on which side runs out of ammunition first, military analysts say. About half of the 300,000 rounds destined for Ukraine have already been shipped to Europe and will eventually be delivered through Poland, Israeli and American officials said.

Ukraine is redoubling its pleas for more advanced weapons in a pivotal week of diplomacy involving its American and European allies. Kyiv’s main Western supporters increasingly agree that time is running out to enable the Ukrainian military to break the deadlock with Russian forces and drive them back, while also defending against devastating Russian missile attacks on infrastructure.

What’s next: Senior defense and military officials from dozens of nations, including NATO states, will meet at Ramstein Air Base in Germany on Friday to discuss sending Ukraine more tanks and other arms.

Étienne-Émile Baulieu, the 96-year-old scientist who came up with an idea for an “unpregnancy pill” decades ago, has led an eventful life, from his teenage days in the French Resistance to his friendships with famous artists.

Scientifically and medically, he said, “women are not enough understood,” adding: “I like women. Why not?”

Chelsea’s wild and exciting spending needs a plan — just ask Everton: Across Europe, there is a growing distinction between clubs working with clear visions and those who are too easily given to impulses. Chelsea would be wise to heed its competitors’ mistakes.

Picking ideal signings for top European clubs: The January transfer window is open for just a couple more weeks.Bayern Munich needs a goalkeeper, Inter likes the look of Marcus Thuram, and Atlético Madrid is in the market for a commanding center back.

From The Times: Play at the Australian Open was halted on Tuesday afternoon because of extreme heat, and then again at night because of a torrential downpour. The tournament banned Belarusian and Russian flags from the grounds yesterday after a courtside incident.

Secret talks about the Parthenon Marbles

In the early 1800s, a British aristocrat brought some of the greatest treasures in antiquity home from Greece, including carved frieze panels that once decorated the Parthenon. Today, we know them as the Elgin Marbles, which are on display at the British Museum, in London, and the subject of perhaps the world’s most notorious culture dispute.

Britain says the Marbles were legally acquired and are best shown alongside other artifacts in a museum. Greece says they are looted treasures and a foundation of national heritage. One Greek lawmaker called it a “matter of dignity for all Greeks.”

Officials on both sides have acknowledged that private negotiations about the return of the Marbles have taken place. But even as those disclosures have flowered into optimism that real progress will soon be made, both sides have made it clear that no deal is yet imminent.

Related: European paintings from before 1850 were once a bedrock of the art market. Works by the old masters now make up just 4 percent of sales at Sotheby’s and Christie’s, as buyers increasingly want works by living artists.

Rediscover the Italian novelist Alba de Céspedes. Nearly 90 years after the release of her first novel, her work has lost none of its subversive force.

Here’s today’s Mini Crossword, and a clue: Shirt size towards the back of the rack (three letters).

That’s it for today’s briefing. Thanks for joining me. — Natasha

P.S. Adrienne Carter, The Times’s current Asia editor who is based in Seoul, will soon become Europe editor.

“The Daily” is about China’s “zero Covid” pivot.

Reach Natasha and the team at [email protected].

Tags
Have That Time Ukraine With

California Has More Than 100 Gun Laws. Why Don’t They Stop More Mass Shootings?
39 mins ago